Genoskin brings unique alternative to animal testing to the US 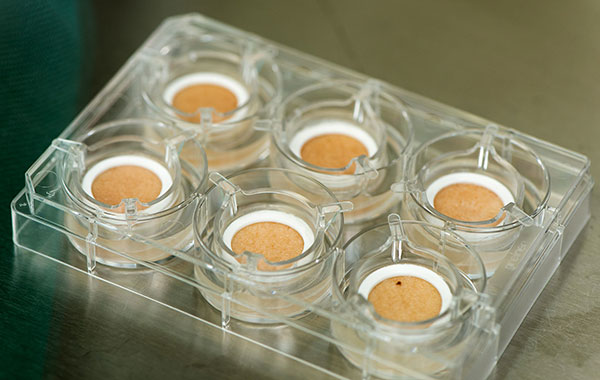 Toulouse, France, August 29, 2017 – Genoskin, a company that provides a cutting-edge alternative to animal testing by keeping donated human skin alive, today announces its expansion into North America. The biotech has established a representative office in Boston and plans to open a local production unit in the first quarter of 2018.

Genoskin provides a unique alternative to animal testing using excess human skin that is kept alive in testing wells. The skin is donated by patients after common plastic surgery procedures, such as tummy tucks. At the end of these procedures, any excess skin is generally disposed of by the hospital. The Genoskin team now recycles this skin into a patented testing model for cosmetic, pharmaceutical and chemical companies as well as research institutions. The retrieved skin is placed in a testing well that contains a special biological matrix to keep the skin alive for several days.

Unlike animal skin, bioprinted skin or skin that is grown in laboratories, Genoskin’s skin tissue model contains real, live human skin to study drug and compound toxicity and efficacy on a model that is as close as possible to in vivo human skin. “Animal testing is inefficient, time-consuming, expensive and increasingly perceived as unethical. We believe our technology marks a turning point. Not only do our human skin models address all these issues, they also help eliminate the major problem of efficacy and toxicity issues that arise due to differences between animal and human tissue,” said Pascal Descargues, founder and CEO of Genoskin. “Our skin models help academic institutions, pharma, cosmetic and chemical companies obtain more predictive results in order to lower R&D costs.”

A growing number of countries prohibit the use of animals to test cosmetic products, such as within the EU and in India. In the US, animal testing is an increasingly controversial topic. Moreover, as animal tissue differs from human tissue in many aspects, a large majority of the drugs that are validated on animals during preclinical studies will never reach the market(1,2), mainly due to toxicity and efficacy issues in humans.

“The US market is of key importance to us,” said Pascal Descargues. “Genoskin already has customers in the region. US sales represented 30% of the company’s overall turnover in 2016. We’re delighted to be able to set up a new production unit in the US in 2018.”

Genoskin’s new production unit will be located in Boston, one of the world’s largest biotechnology hubs, an ideal environment in which the company can expand its US reach. The local production unit will allow US customers to take full advantage of the product’s life span and benefits as they will no longer be subjected to the customs, FDA and/or USDA procedures that apply when bringing human skin samples into the US.

Genoskin’s test models are covered by a US patent. To date, there are no equivalent skin models on the US market. The company has started a fundraising campaign and is open to industrial, financial and academic collaborations to boost its US expansion.

Genoskin SAS is based in Toulouse, France. It was founded in 2011 as a spin-off of the French National Center for Scientific Research (CNRS) and the Paul Sabatier University. The company provides unique human skin models to test chemical, pharmaceutical and cosmetic products in order to avoid animal experiments. Genoskin uses donated human skin tissue collected after surgery and a cutting-edge technology to keep the excised human skin samples alive in a standardized ex vivo culture system. Genoskin won the French National Award for Innovative Technology in 2011. The company is ISO9001:2015 certified and driven by an experienced team, 40% of whom hold a PhD. Genoskin reached break-even in 2015. In 2016, 80% of Genoskin revenues were generated by export sales.

1 Briefing Cost of Developing a New Drug, Tufts Center for the Study of Drug Development. November 18, 2014