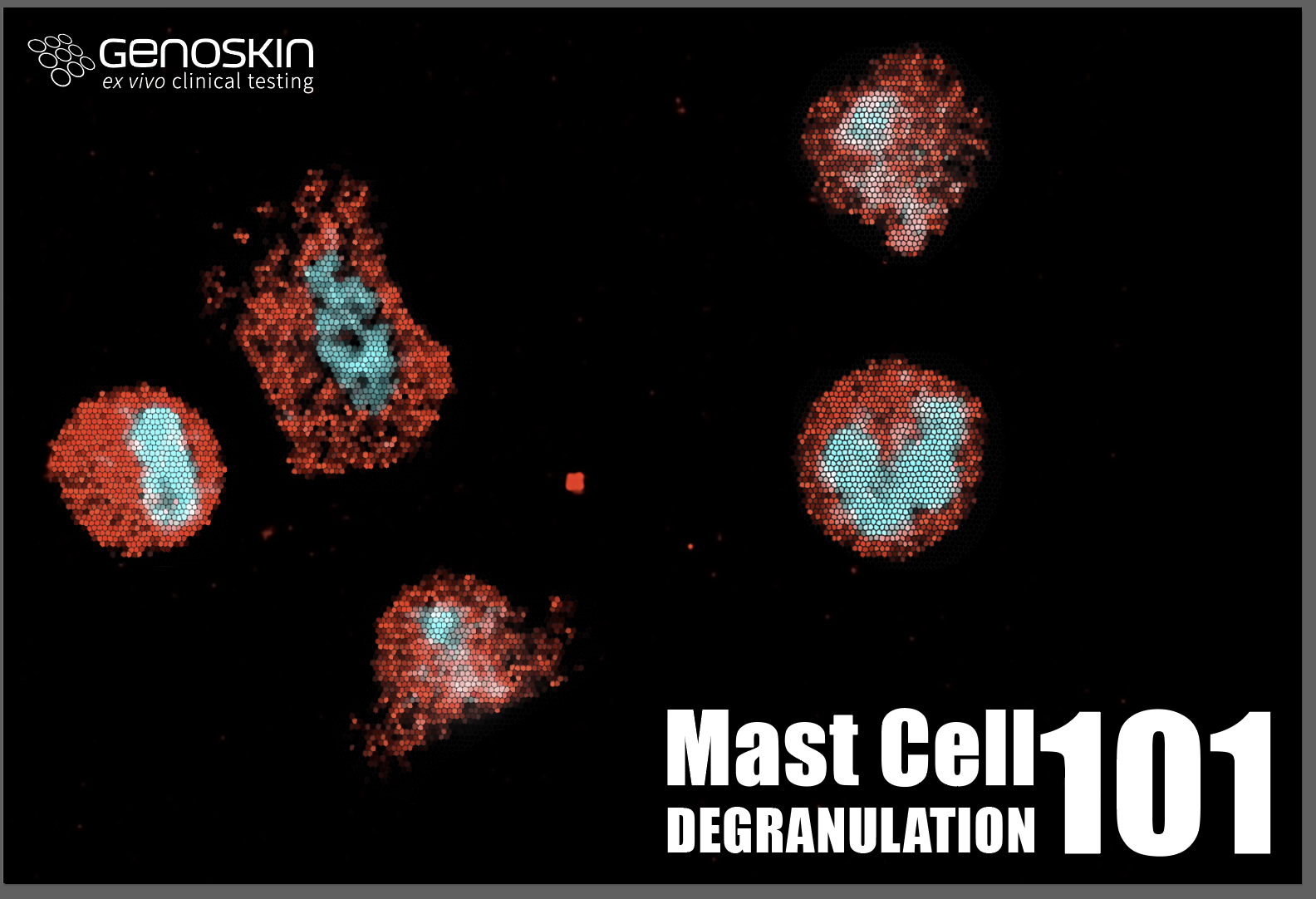 30 November 2020 By Genoskin Comments are Off

A cellular model to better understand the underlying mechanisms of Injection Site Reactions (ISRs) and other severe allergic reactions.

Human mast cell degranulation can be quantified and characterized by a broad panel of custom assays(Figure 2).

These studies are essential to understand how a compound triggers the degranulation process and the underlying mechanism of mast cell activation.

Another useful tool is to quantify the de novo secretion of mast cell-associated cytokines in the supernatant and run MSD analysis.

Why is studying connective tissue-type mast cells in preclinical trials useful and necessary?

Mast cells are long-lived innate immune cells derived from both embryonic and hematopoietic progenitors that have migrated and completed their maturation in tissues, including the skin (ref.1). They are located in connective tissues and mucosa, at the junction of a host and its external environment where they act like sentinel cells against pathogens.

CTMCs have been studied and identified in both murine rodents and humans (among other mammals and other reigns). They are found in the peritoneal cavity, gastrointestinal tract and skin. Their cytoplasm contains granules with heparin proteoglycan and high amounts of histamine. To date know that mast cells are phenotypically distinct between mammal species and especially between mice and humans.

What if it wasn’t an IgE-mediated reaction?

Mast cells are known to play a key role in initiating acute allergic reactions such as anaphylaxis, a severe IgE-mediated hypersensitivity reaction against otherwise harmless antigens usually found in medicines or food ;

However, even if mast cells can be activated by a large number of receptors, recent studies have highlighted the important part played by a human skin mast cell-specific receptor called MRGPRX2 (i.e. Mas-related G-protein coupled receptorX2 – MRGPRB2 is the mouse ortholog) (Ref.2).
MRGPRX2 can be activated by a large panel of cationic molecules such as neuropeptides (e.g. substance P), venom peptides, host defenses peptides and also a number of FDA-approved drugs.

Once bound to one of these ligands, MRGPRX2 induces mast cells to release cytokines, lipids, and granule-associated proteases which modulates immune cell recruitment, vascular permeability and activates sensory nerves. This mechanism leads to symptoms such as severe itch (pruritus), pain and local inflammation.

While not intended to target the immune system, some drugs can alter or trigger these immune functions.

Such mechanisms can be observed in injection site reactions also called ISR.

ISR occurs in 10 % of patients that has been injected with a chemical or biological drug.

Although immediate ISRs present common symptoms with a hypersensitive reaction, they are not IgE-mediated reactions but MRGPRX2-mediated, and can appear without previous sensitization to the trigger.

Current studies show that many drugs triggering ISR have a present THIQ motif (i.e. tetrahydroisoquinolinone) in their molecular structure.

This characteristic is promising because it provides an accurate and precise tool upon preclinical trials to either eliminate drug candidates with potential side effects or select them to target specific receptors, such as MRGPRX2 and its specific mechanism, to treat certain allergic reactions.

Assays conducted on mast cells are a must in pre-clinical trials as they will give strong insights into the type of inflammation observed in clinical trials and human tissue assays.

Ultimately, we can imagine screening mast cells from a broad range of donors to better predict reactions in the population to a new biologic and therefore strengthen the data and human data for an FDA approval request.